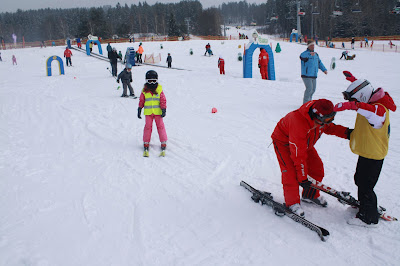 Most of the international schools in Prague have a week off in February for skiing. At Park Lane International it is given the official title of "Half-term Break," but it really is a time to take advantage of the great skiing in the region. Many head to Germany, Austria and Italy, where there are fantastic resorts. One is the Edelweiss Lodge and Resort in Germany, an all-inclusive U.S. military recreation facility that U.S. Foreign Service overseas has access to. The lodge fills up quickly and far in advance for school holidays.

Since this Florida native needed to take her time getting back her ski legs, and Sicily is learning, we decided to head to the Lipno Lake Resort in the Czech Republic, where they have a kid's ski park with instructors, chair lifts, and three easy blue runs. The resort was developed and is run by a Dutch company, so there is an international crowd with Dutch, German, Austrian and Italian visitors. It is about a 3 hour drive (in good weather) South of Prague, on the Austrian border. 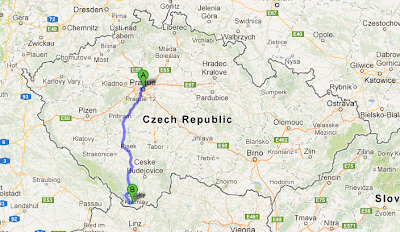 There are actually two places to stay: the Lipno Lake Resort, closer to the ski park and Landal Marina Lipno, closer to the man-made lake. We have stayed at both and found them to be relatively equal. What is more important is how far away your assigned apartment is from the kid's park and lift than which company you choose.

Some of the benefits of the Lipno resort include: relatively short drive from Prague, great ski instruction for kids, activities for kids besides skiing, proximity to Cesky Krumlov and Linz, relatively reasonable in price, and if you are VAT exempt - you get VAT refunded! There are two other ski resorts nearby, so if you get bored of the runs at Lipno, you can move to another park.

Since this is the region for fantastic skiing, if you are looking for something more challenging or luxurious, I suggest looking to Austria and Italy. There are only two small red runs at Lipno resort, so if you are more advanced, you may be easily bored. The accommodations are IKEA-like furnished apartments. They provided a crib and high chair. There are several restaurants and a grocery store at the resort. You can also arrange for an daily order of fresh bread. 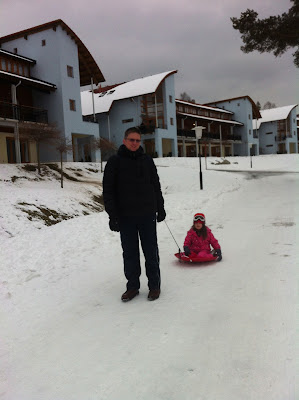 Preferred mode of transport for the kids

While we were there, it snowed almost every day so we were able to shuttle the kids around on sleds. They built snowmen and Sicily was able sled down hills after skiing. It wasn't cold enough to skate on the lake this year, but we were able to last year. You can rent ski and skate equipment at the resort. 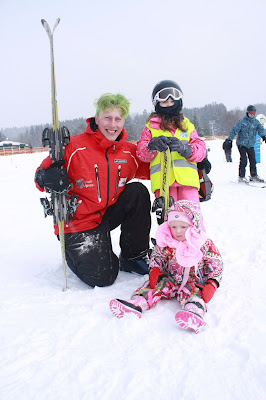 The best part of Lipno resort is the ski instruction for kids. After a half hour in the kid's park, Sicily's instructors had her up the chair lift and down the blue runs. By the end of the week, she and Joseph were catching some air off the moguls in the snow park on the back runs. She had two instructors during the week and they both were excited to have a native English speaker. They are used to having German, Dutch or Austrian kids and speaking English to them as the common language. Joseph had lived in Kansas as an exchange student, so he was very excited to practice his American English. 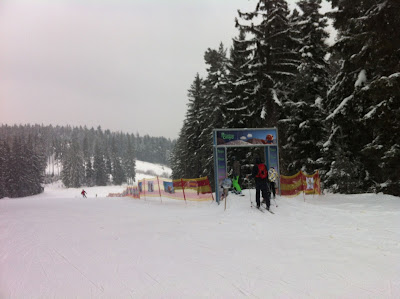 Snow park with moguls on one of the runs 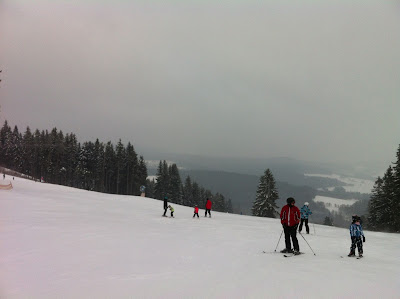 From the top of one of the blue runs 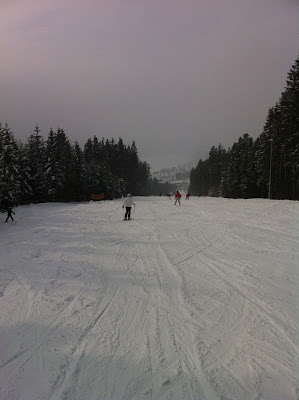 It snowed almost everyday so there was fresh powder

There were a lot of kids on the slopes. It can be a little frustrating for a beginning adult skier to see all these little kids zoom by you with no fear. I kept telling myself that they have a lower center of gravity, right? I was so impressed with the parents teaching their kids. There is this seat-belt type device that you can strap on the child and help them turn left or right, while you ski behind them. In about two years, Sicily will be using it on me! 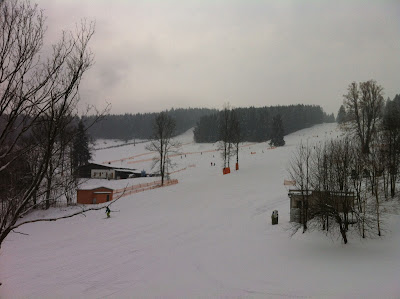 The runs at the back of the resort 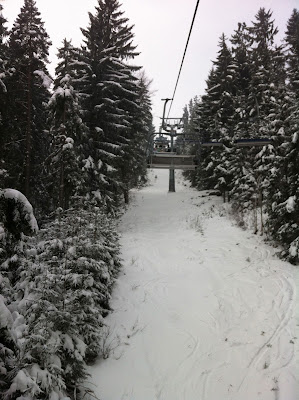 Lifts through the trees 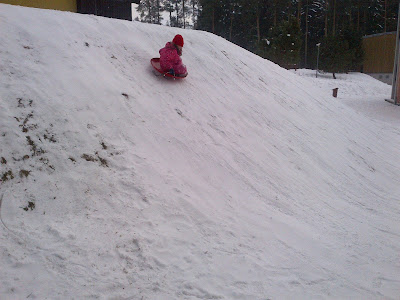 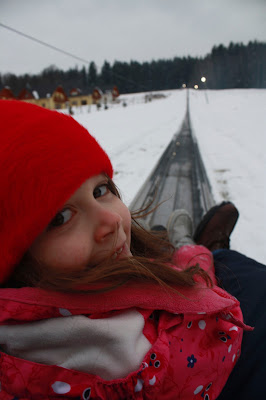 On the toboggan run 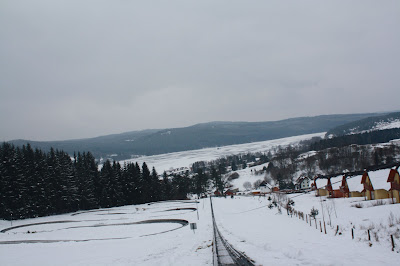 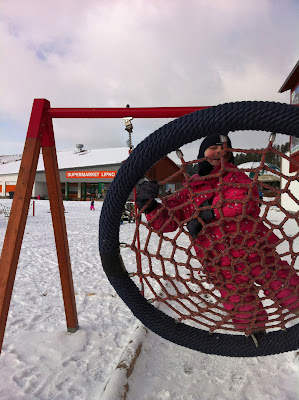 One of three playgrounds at the resort, still fun in snow! 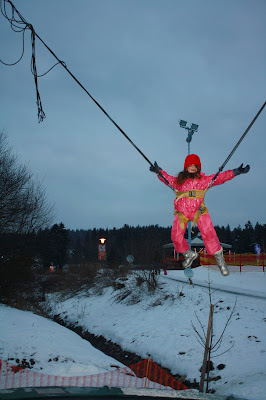 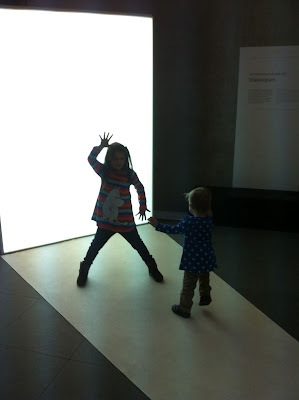 The Ars Electronics museum in Linz

We took two side trips, one to Linz about an hour away and another to Cesky Krumlov, about thirty minutes away. Another fun trip is to the original Budweiser brewery in České Budějovice. 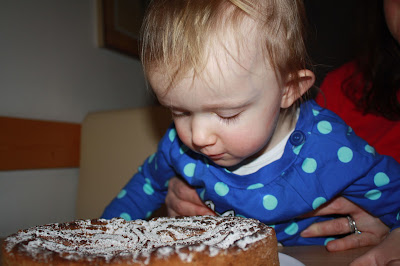 We had to eat Linzer torte, from Linz 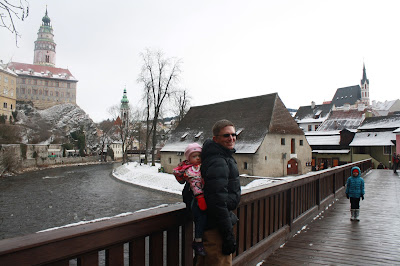 A side trip to Cesky Krumlov 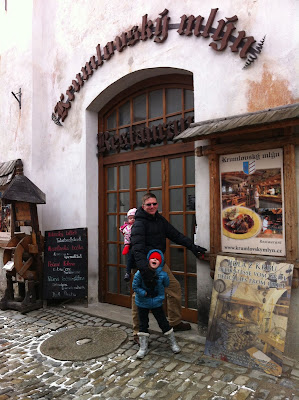 We went back to this restaurant in Cesky Krumlov for the beans, yum! 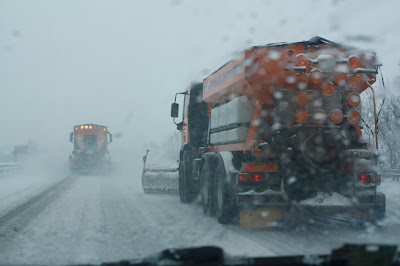 Our drive home after all of the snow fall. 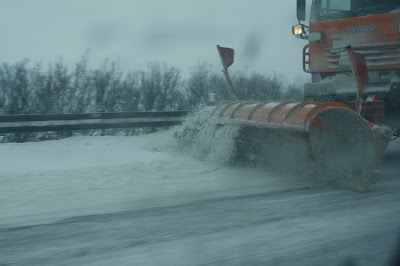 We were behind three trucks on the largest road in the Czech Republic, yikes!
on March 05, 2013