Kolkata: The City of Protests 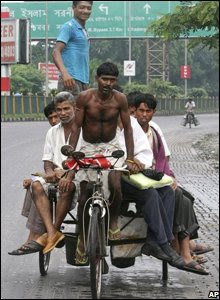 Last Wednesday was the largest "bandh" we have experienced yet. As wikipedia describes it, a bandh is "a form of protest used by political activists in some countries in South Asia like India and Nepal. During a bandh, a major political party or a large chunk of a community declares a general strike, usually lasting one day.”

West Bengal, where Kolkata is located, has the most bandhs, about 40-50 per year. Many are held in our area, so we are often affected by them. Mostly they are peaceful demonstrations meant to generate attention by snarling up traffic.

What made last Wednesday's so special is that everyone in the entire city of Kolkata was banned from opening business and commuting, or they would have been harassed or threatened. This included trains, airplanes, cars, taxis, autorickshaws, buses, any mode of transportation. Many who commute daily, had to stay home for the day. The bandh was to protest rising inflation.

The next day I was in a meeting with a handful of university professors from around the city, and I asked them how they dealt with all of the unknown disruptions. They excitedly looked at me, since I now had a glimpse of their challenging circumstances and said, see this is why we can not plan in advance, not even a semester in advance. With these challenges and the many others students face in Kolkata, it is extremely commendable how Kolkata schools turn out so many well-educated students.

While your observation on the city is partly correct, you missed the hidden agenda of these bandhs. Tagore, who continues to be correct in understanding bengali mood even after a century, observed: Bengali's have never grown up.

Thus, a mere 500 greedy farmers hankering for more money for their land can hold the state for a ransom and strangulate development attempt, while rest of the people remain a mute spectator of the whine, some even join the bandwagon without really understanding why they are in it.

It is not a city of protest, but a city of whining. If you try to organize a handful to work 4hrs extra to reduce the inflation, you will understand where the protest lies.

Thank you for the enlightening and insightful perspective.