Remnants from a Past Vacation 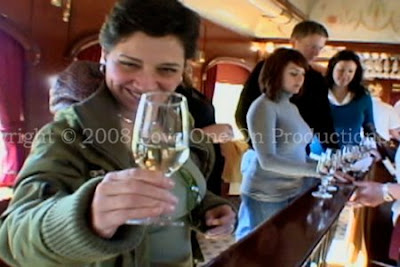 Alan and I are addicted to Napa valley in the Fall. After our first vacation there together, we vowed to try to make it back as often as we could. In 2006, we happily booked our trip looking forward to the changing leaves, the beautiful weather, great food and fantastic wine.

Then our cards really came in. Alan has a wine blog, which has been on hiatus especially after joining the foreign service, Winesmith. A fellow blogger had to cancel his vacation to Napa where he had lined up some activities and wanted to know if we could take them off his hands. In return, Alan would have to write reviews of the different places. What a very small price to play for a night's stay at the Jordan winery and a trip on the Napa Valley Wine Train.

Jordan wine is exceptional and has a cult following. Everyone else on the tour seemed to drink case loads of it and only it. On the Napa Valley Wine Train, we had a really fun time, with great food and great company including a film team from Spain.

They were making a film about wine, not from the typical perspective of technique and geography but about the intangible qualities of wine - what makes us love it so much. Their hard work has finally paid off with a debut on PBS in California, called The Spirit of New Wine.

From the pictures they just sent, it looks like we may be in the film enjoying a glass or two on the train. If you are in the Sonoma region or can get PBS affiliate KRCB, check the film out on October 12th for the first installment, then on October 19th for the second. Congrats Love One On Productions!
on September 07, 2008