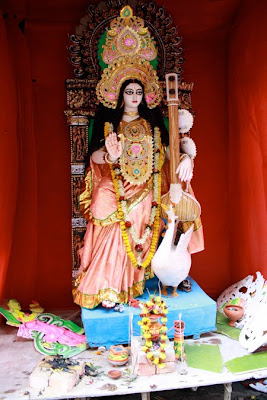 This past week Saraswati Puja was celebrated, typically held "on the fifth day after no moon night in the Hindu month of Magh." The goddess Saraswati is the goddess of wisdom and learning in Hinduism, and a very popular puja in Kolkata. She is often depicted with a sitar and seated on a lotus with a swan by her side (her preferred method of transport). Her four arms represent the four aspects of human learning: mind, intellect, alertness, and ego.

On the day of the puja, students take the items they use in school, (notebooks, pencils, etc.) for a ritual before the deity. Preschoolers are often taught to write on this day. A friend of ours took her two and a half year old to the puja with the mandatory small black board and chalk. He sat with the priest in front of the idol and wrote the Bengali alphabet. This was the ritual to begin his education, as he begins preschool. 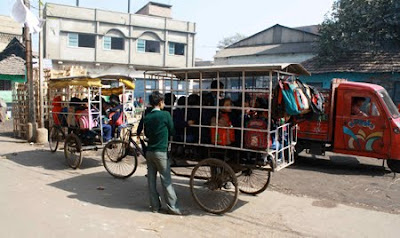 Many children in Kolkata go to school in bicycle rickshaws or auto rickshaws as in the photo above. There is a great book called Going to School in India which depicts all the different ways kids get to school in India, from camel carts to a wooden cable swing over a river. Talk about a better, "when I went to school I walked two miles, uphill, both ways" story. 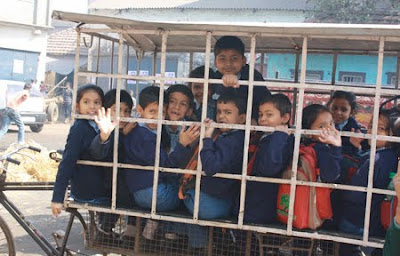 The book also shows different school projects and activities from across the country, which makes it interesting to compare with topics in American schools. There is also the related DVD, Going to School in India. 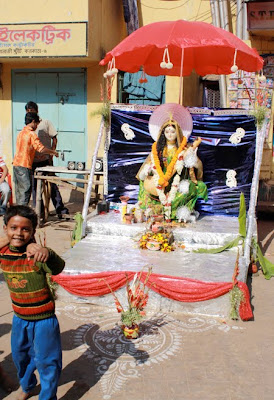 But back to the puja. In comparison to Durga Puja, this puja is celebrated in homes and neighborhoods, while Durga Puja is more of a neighborhood-based public celebration. Since it is a more personal puja - an expression of hope for the education of a child - there is more active participation in the rituals. With more idols and practice, there is more demand for the Hindu priests, who have very tight and demanding schedules. 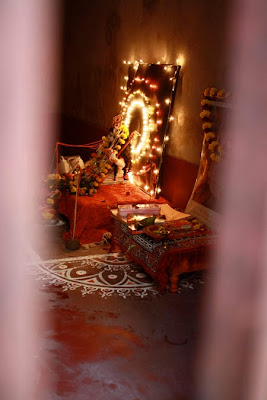 A more intimate celebration of the deity in a home. 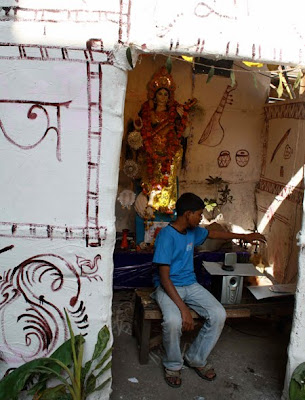 This pandal had a DJ. This one had a beautiful head wrap made out of plants to rival Aretha's inauguration hat. 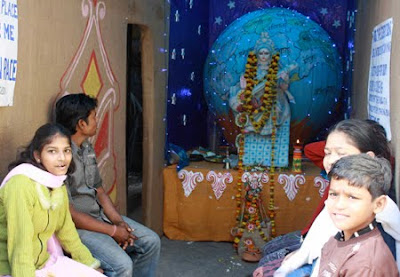 Children still enjoying their puja. They had written quotes from famous people on peace and respecting the environment.
on January 22, 2010