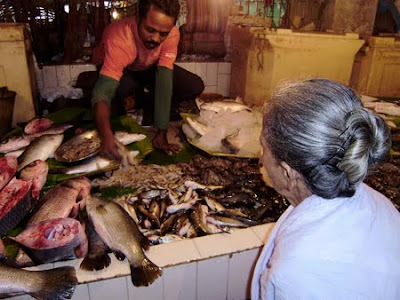 The Gariahat Fish Market in Kolkata has the reputation for being the freshest fish market in town. During my last visit I brought my camera to capture the best season there, when both the fish and the vegetables are at their peak. One of the entrances to the market in the Gariahat section of Kolkata. 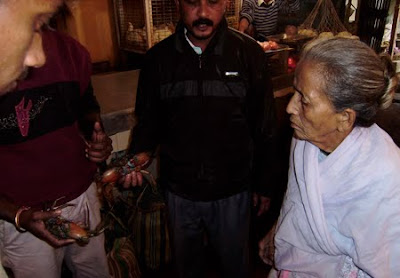 We started out with crabs at Rs. 480 a kilo ($4.75 US a pound), that looked a lot like Maryland blue crabs except with much bigger claws. Krishna negotiated hard but when she found out that she could have gotten them from another vendor for about 50 cents cheaper later in the morning, she vowed never again to go this vendor. 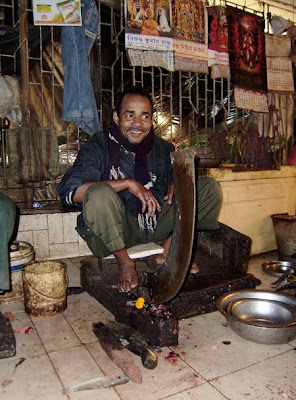 One of the guys that will fillet your fish at purchase. Notice the boti, a much larger version than Aarti used in our kitchen. 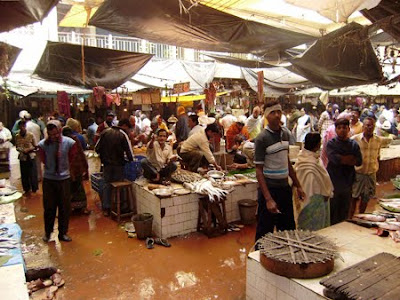 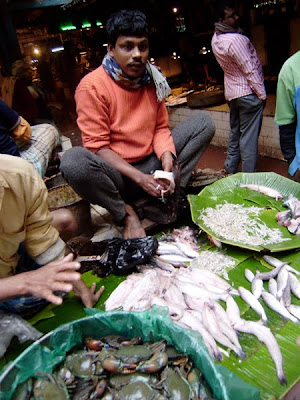 We bought silver fish from this vendor. They are very small fish much like minnows that Krishna said was a common Bengali dish. 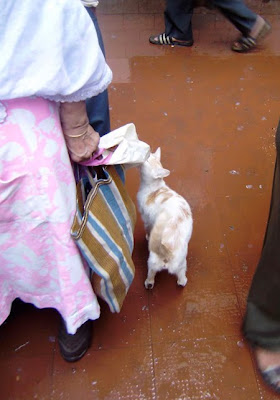 The ubiquitous fish market cat checking out our purchases. 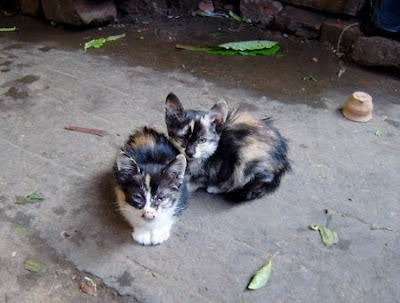 The reason why there are so many cats in the foreign service. I was so close to bringing them home with me. 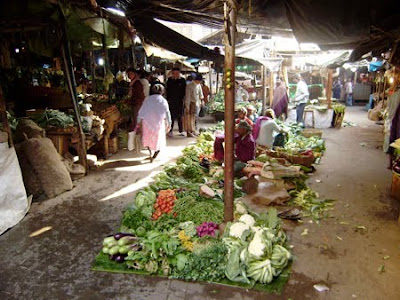 Krishna starts on the vegetables 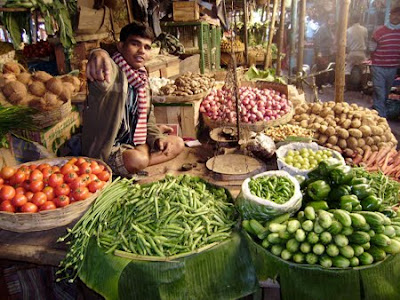 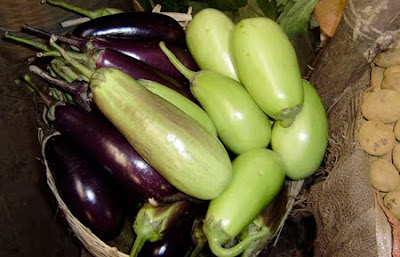 Three varieties of eggplant are readily available. There is a debate over the origin of the eggplant some say China, some say India. Though, the humble cucumber's origin in India is not disputed. 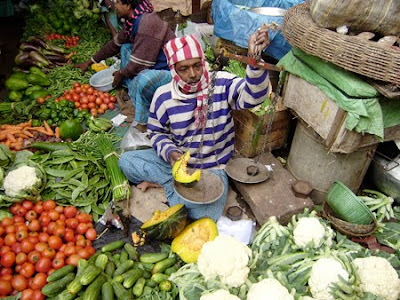 We bought a slice of pumpkin from this guy for soup. Could he be more photogenic? Notice the way purchases are weighed. 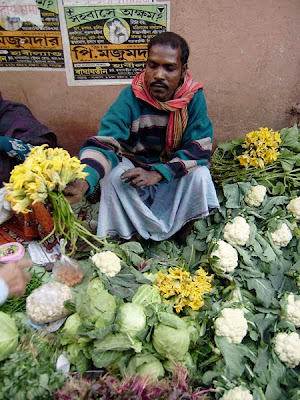 It is hard to describe my reaction in words when I saw these: "What!!!! Squash flowers in Kolkata? How come I didn't know this? We got to buy these!!!" The are called red pumpkin flowers here, a little larger than the ones in the US but just as delicious. I had to immediately run home and make ricotta. 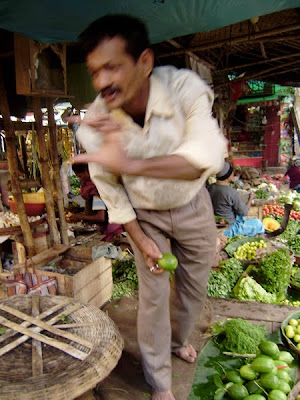 This photo captures the reason why I like to go to the market with Krishna. This vendor wanted Rs. 6 per lime (13 cents), but Krishna would not budge past Rs. 3 (7 cents). They argued for a while, then the vendor gave up. She could get them at another market for 3, so no need to pay more. 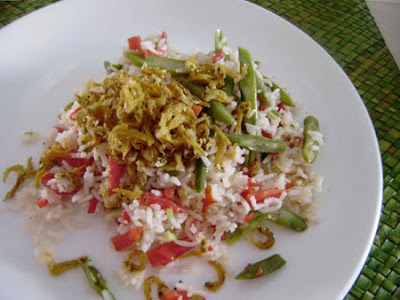 What an adventure! Wish I could sample the end result!

Very interesting. I would love to know more about how he was weighing the product. It was a bit hard for me to tell...

Hi There, I just found your blog and read the whole thing in one sitting! Very interesting. My husband is taking his Orals in a few weeks and I would love to ask you a couple questions since you have just been through it not long ago. Can I contact you by email?

amazing. I always love market pictures. I think they're such an excellent lens through which to peak in on other cultures. I love that you make your own cheese too. In my dreams I envision myself boiling up pots of fresh creamy mozzarella, though I still haven't had the nerve to try it. maybe I'll start with ricotta!

Oh this is wonderful! I'm currently in the middle of applying for the Foreign Service and am really hoping for a posting in India at some point. I also had the chance to visit this market in June. Everyone seemed a little amused that I had a camera, but what a cool place!

Love your pics, they bring back fond memories. Miss the atmosphere at the Indian Coffee House, although I frequented the one on Central Avenue more.

I SO hear you on the fs cats! We ended up with our Malay kitten after our MSG's were killing them while drunk on the EMB grounds. Although they also found a giant python on the EMB grounds so either way the kitten was done for!

Krishna drives a hard bargain! I can't wait to experince the markets with her. The end product on your table looks so delicious. Your photos are fit for a gourmet magazine. I love candid photos of the Indian vendors.

In Ukraine, I was pretty content to pay the "Ukrainian tax" -- but our helper Katya would sometimes roll her eyes when she heard what I paid. . .

It was a great day when a lady at the market asked if I were from Poland -- no longer was I sticking out as an American!